"Alert Taxis is a very switched on, technology-based company, allowing people in Auckland to see a different light in the taxi industry."

Alert Taxis' have succeeded in building a company that is young, fresh and full of vision. They have positioned Alert as the 'leader of the pack' in the industry, impressing both customers and drivers with its state of the art technology and passionate leadership. Their vision is to be a taxi company for the Auckland public that is forever changing, offering new systems and cutting edge technology for its clients.

In addition to this, their goal is to be associated with every major Auckland event where transport is required. To date, they have achieved this by being the official transport provider for the Air New Zealand Fashion Week for 5 years in a row, as well as the Ellerslie Flower Show, also for 5 years, and the V8 Super Cars. In addition to these major Auckland events, their blue chip clients include Air New Zealand, Fonterra, Noel Leaming, Loreal Cosmetics and The Warehouse. 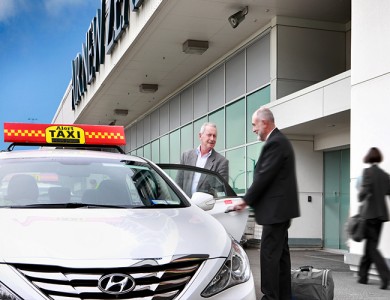 "Goals are the fuel in the furnace of achievement" - Brian Tracy, Eat that Frog

Alert Taxis was established by Mr. Hawthorne and his family in 1960 and has been operating a fleet of taxis in the Auckland area since then.

Current owners, Paul and Robert, had always had a good relationship with Alert and with the Hawthorne family. They were working for an opposition company at the time, and although Alert Taxis was their competitor, they both recognized early on the strength of the Alert brand. They believed it had the right colours for a taxi: orange, red and white, very simple, very clean.

When they decided to purchase their own organization the obvious choice was Alert Taxis. They saw huge potential, and being young and idealistic they had the energy and enthusiasm to make a go of it.

The original goal of the company under Robert & Paul was;

When the public think Alert Taxis, they think nice car, safe company, cars arrive on time and easy to order.

To find out how Alert Taxis can be of service to you, please click here.